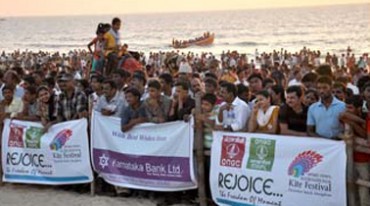 Over a lakh people gathered to witness the ONGC-MRPL International Kite Festival 2010 at Panambur Beach on Saturday 16th January 2010 and Sunday, 17th January 2010. It was a memorable day for kite lovers watching in awe and delight, hundreds of colorful and magnificent kites in all shapes and designs vying for their attention.

For this event, the only International Kite festival of Karnataka state, teams from 5 countries came down to participate with their prized collection of world-class kites ranging from stretch long fighter kites, inflatable kites, fun kites and even power kites and stunt kites. The sky was adorned with artistic kites of various shapes and sizes. Kites shaped like birds, crocodiles, Cuttle fish, penguin, giant turbines, acrobat kites, honey bees, ships, mythological characters, aeroplanes, etc were flown by the delegates. If competition was evident among the participants. It was the localites who enjoyed the festival by bringing along their own kites and flying them with great enthusiasm. A Kite stall for Kite lovers, Food stall and other stalls were set up for the benefit of the crowd.

Amongst the foreign flyers Mr.Karl Longbottom and Mrs.Sara Karl from UK exhibited their DOVE collection, AWITA (All Ways In The Air) from France made acrobat show and presented large Aerofoil kites such as Teddy Bear, Penguin, Giant Fish, Cuttle Fish, Giant Eggs and Giant Turbines. Mr.Raymond De Graf from Holland, Mr.Axel Kostros from Germany, Martin Van Han from Netherlands, MR.Bob Crushanks from UK filled the Mangalore sky with colourful kites. Adding to the attraction, the Team Mangalore introduced Mr.Nicolas Chorier, a French Aerial Photographer who tied a highly sophisticated camera to a kite and shot the entire event from sky.

The festival was graced by the presence of several dignitaries who relaxed at the Beach and enjoyed the fun-filled festival. The success of this event goes to the huge but disciplined crowd of Mangaloreans who had come in thousands to the Panambur Beach.