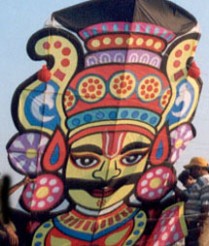 This 'Yakshagana' kite is modelled on the vesha (costume) of a kingly character in the popular folk dance-drama 'Yakshagana'. It is 32 feet long and 12 feet wide. Using the rip stop nylon material of various colours and the 'Applique' technique, this kite was diligently pieced together. The total expenses incurred for making this Kite is Rs. 40,000/-.

A brief description of the actual process involved :

An Art model of the Yakshagana vesha was first made by our artist Mr.Dinesh Holla. Based on this model and after discussions, the size and design to be adopted was fixed up. A 32 feet long, 12 feet wide prototype of the art work was then plotted using a plotter. The design was then traced out on the various coloured cloth using this prototype, followed by the tedious painstaking process of cutting and stitching it together. This required the dedicated, patient effort of 10 people, each working simultaneously on the various parts of the Yakshgana vesha before assembling it together.

The next stage of the kite design involved the design and fitting of spars, pouches, bridles and bowline. While the spars were of bamboo, in cases where the length of the spar was above 7 feet, Aluminium coupling was put to use. Finally the bridle and bowline were fit into place and the kite was ready to fly. After more than 500 hours of effort, put in by 10 people, the kite took off on its first flight in the air, without any hitch, on the shores of the Arabian Sea.

We are proud to say that one of our team member, Mr.Prashanth Upadhyaya, is also an amateur Yakshagana artiste. It will be our privilege to give a live demonstration of this folk art during Kite Festivals for the benefit of anyone who is interested in knowing more about Yakshagana.

The Yakshagana, rich folk dance drama is an unsurpassed way of exhibiting the themes taken from the Indian epics . The term 'gana' signifies music and as such Yakshagana means a particular style of music with characteristics of its own, distinct from the other two systems of Indian music, Hindustani and Karnataki. In course of time, plays in this style came to be known as Yakshagana prasangas. Prasanga means , a theme, or a story. Yakshagana can be enjoyed with profound interest even be those who do not know the language in which it is presented.

Yakshagana, as a medium of presenting the religious appeal through the depiction of various events from epics like the Mahabharata and the Ramayana, includes the characters of gods, divinities, demons, avatharas (reincarnation of gods and goddesses). Costume and facial makeup is an elaborate affair in Yakshanaga and some characters require three hours for the job. The makeup is intricate for roles like Kiratha (hunter), a Gandharva (celestial being), a Rakshasa (demon) or a Rakshasi (female demon).

Yakshaganas are traditionally performed throughout the night, in open air. The stage is constructed in a paddy fields or a temple yard. An area measuring about 20' x 20' feet becomes the stage proper called Rangasthala. Behind the stage, a raised bench, or a table or two are placed for the Bhagavata and his accompanists called Himmela. Bhagavata is the anchor person of the Yakshagana performance, traditionally he is the leader of the troupe. The stage arrangements, movements, direction are managed by the Bhagavata. He guides the artists about the script, the story background, characters and their responsiblilies. At the left hand corner, sits the man who plays the chende. Chende is a high strung drum played with two sticks. Another drum called maddale is played by the drummer, who usually sits to the right of the bhagavata. In Yakshagana, it has been the custom from the time immemorial, for the males to play both male and female roles.

Yakshagana plays are often likened to Kathakali plays of Kerala. Yakshagana dance form, consists mostly of nrithya aspects of footwork, the rhythmical body movements including those of the neck, arm and palm. It contains fine postures, body flexions, as with a few squatting, jumping and ruling movements. The Yakshagana player uses simple gestures to express the meaning of the song which the Bhagavata has sung.

There are more than 25 professional melas (troupes) that perform throughout the four districts of Coastal Karnataka (Dakshina Kannada, Udupi, North Karnataka and Kasargod). Each of the professional Yakshagana mela is usually attached to a particular temple, where devotees use Yakshagana as an offering for their prayers. Apart from this, there are many amaeture troops who perform whenever they get an opportunity. In recent years, entry of educated enthusiasts has led to improvements in the standard of dialogues used.

Normally the professional Yakshagana team start performing immediately after the harvest season and carry on till the arrival of monsoon. The first show is usually hosted at the temple to which the mela belongs. Since every mela has atleast 50 members including the assistants and other helpers, and atleast 25 yakshagana performances will be hosted at various places at any given time, about 1500 people depend on this as a means of livelihood every season. They revert back to the profession of agriculture during the monsoon.