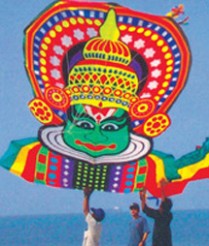 This kite is fashioned after the classical dance form of Kerala. This is not a painting! It has been painstakingly stitched using various coloured cloth. A joint effort of ten people over a period of 530 man hours

Kerala, a picturesque State along the west coast of India, hosts an enchanting form of Dance drama called Kathakali. This rich and flourishing traditional dance-drama, beckons the audience with the sound of drums as night falls, and keeps them enchanted through the night, with performances of episodes from the ancient Indian epics such as Ramayana and Mahabharatha.

Kathakali, is a well developed art form which can be traced back to the 17th Century. It draws heavily from drama but uses dance to the accompaniment of drums and vocalists the create the various moods and emotions. The combination of dance and the mythical dialogues bring an air of festivity to the temple courtyards of Kerala where it is usually performed.

The technique of Kathakali includes a highly developed language of gestures, through which the artists convey whole sentences and stories. The body movements and footwork are very rigorous and intricate.

The dancers adorn themselves with huge skirts and head-dress as part of their elaborate costumes. The make-up of these artists is also elaborate and the colors used in the make up, is determined by the type of character being portrayed. The faces of noble characters, such as Kings and divine heroes like Rama are predominantly green.

The kite "Kathakali" represents one such noble character. The Kathakali kite is made of 'rip-stop nylon' and bamboo (for spars) without using paint. The entire kite has been intricately stitched using appropriate colored cloth. It took 530 man hours to prepare this magnificent kite. The approximate cost for making this kite is Rs. 30,000/-.