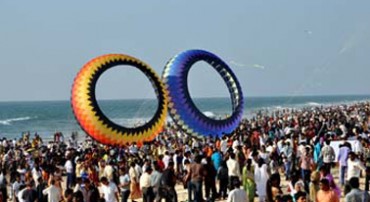 This is the 4th International kite festival conducted in Mangalore by TEAM MANGALORE. On 16th and 17th of Jan 2010 at Panambur beach the sky was decorated by spectacular kites by more than 20 kite fliers from 5 countries viz: England, France, Netherlands and Germany along with many kite enthusiastic Mangaloreans. The giant kites of AWITA team enthralled the people, The kite’s eye view was captured by Nicholas chorier, famous aerial photographer.

This time people got the opportunity to enjoy the giant aerofoil kites, 2 line and 4 line stunt kite show.

TEAM MANGALORE expresses its sincere gratitude to everyone who strived their best to make this International kite festival a grand success.