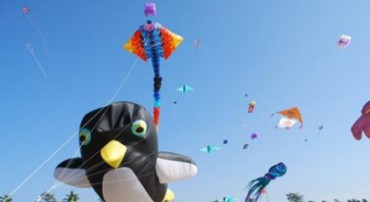 Overcoming the Tsunami scare, over a lakh people gathered to witness the International Kite Festival 2005 at Panambur Beach on Sunday, 23rd January 2005. It was a memorable day for kite lovers watching in awe and delight, hundreds of colorful and magnificent kites in all shapes and designs vying for their attention.

For this event, the first ever International Kite festival of Karnataka state, thirteen teams from 7 countries and 14 national level teams from 7 states of India came down to participate with their prized collection of world-class kites ranging from stretch long fighter kites, inflatable kites, fun kites and even power kites and stunt kites. The sky was adorned with artistic kites of various shapes and sizes. Kites shaped like birds, animals, honey bees, ships, mythological characters, aeroplanes, etc were flown by the delegates. If competition was evident among the participants. it was the localites who enjoyed the festival by bringing along their own kites and flying them with great enthusiasm.

The festival was graced by the presence of several dignitaries who relaxed at the Beach and enjoyed the fun-filled festival.

Sri. Subhir Raha, Chairman and Managing Director of ONGC, the Premium sponsors of this International Kite Festival took precious time off from his hectic schedule and honored the occasion with his gracious presence along with other Directors and dignitaries of ONGC.

Sri. Aravind Srivatsav, Deputy commissioner, D.K. District, whose administrative help and guidance ensured smooth running of the festival, honoured the event by participating in the Festival.

Each of the Kite fliers were facilitated in true Indian style with a Mysore turban and garland and a memento.

A photography festival was organised during the festival itself which received an enthusiastic response. An Art exhibition was also held. A Kite stall for Kite lovers, Food stall and other stalls were set up for the benefit of the crowd. A tsunami Fund collection box was also setup at the venue.

The contribution to the success this event cannot but be given to the huge but disciplined crowd of Mangaloreans who had come in thousands to the Panambur Beach despite memories of the Tsunami hitting the eastern shores of Southern India just a month ago.