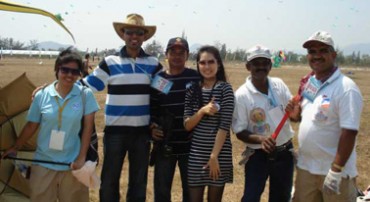 In all 21 countries participated in the festival. Nitin J Shetty, Sarvesh Rao, Prashanth K, and Vasanth Sanil of Team Mangalore was the only team representing India.

The festival was inaugurated by the director of TAT which was followed by 20 parachuters jumping down to the venue. Kite Flying was over a period of three days and was witnessed by the local people and many tourists. It was a festive atmosphere where the public spent the whole day at the venue.

The team displayed and flew special kites such as Yakshagana, Kathakali, Gajaraja, Charlie Chaplin, Owl and Bharatnatyam etc. We also conducted kite workshops on two days for the children and taught them to make Indian fighter kites.

The farewell and thanksgiving function was on a cruise on the river in Bangkok and addressed by the governor of TAT. The Indian team extended traditional honour to the TAT governor and the organizers Ron Spaulding and Baew Spaulding. The organizers termed Team Mangalore as "The star of the show".